How do you make an impact as a journalist? Many of us dream that our work will push institutional change for justice, and that happens sometimes. But as a freelancer with little to no support from any one big media outlet, I’ve focused on making an impact on individual lives. I’m putting this out here not because I want a pat on the back — I want the people who follow my work to know what I’ve been doing in Turkey for more than two years. 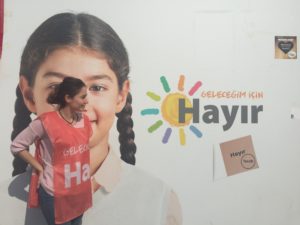 A campaigner for the People’s Republican Party or CHP advocates against giving the Turkish president more power in the 2017 referendum. Her side lost the campaign. Credit: Fariba Nawa

I’ve produced about 50 stories so far: radio, digital and print. I’ve given up several opportunities because of the time I want to spend with my kids and the dangers a story might pose. The pressure to censor our work is immense so I navigate what I can and can’t do here. Press freedom should be a right, but it has become a privilege. For those of you who have it, appreciate it. Whenever I get frustrated with the limitations and the stress of freelance work, I remember these stories:

-“Hoor” was a 16-year-old runaway child bride who braved the refugee trail from Kunduz to Istanbul. A smuggler raped her in Istanbul, then she tried to commit suicide but survived. I told her story for PRI, and shortly after her guardian and I visited the police station, the rapist was arrested. But Hoor was afraid to testify until she realized he’s more of a danger to her and other women outside than inside prison. Hoor says it was Stella Chiarelli, her guardian and refugee volunteer, and the outpouring of support she received after the article, that convinced her to go to court. The perpetrator was convicted of rape for 10 years. It was sweet and rare justice in Turkey. I’m following the story as Hoor struggles and thrives at the same time.

-Suliman Wardak, an Afghan student in New York, was married to an American journalist who was jailed in Turkey but had the privilege of an American passport. He only had a green card and an Afghan passport when he came to aid his wife in Turkey. But she was released and he was jailed on charges of terrorism, then freed but trapped in Turkey under judicial control. He couldn’t leave Turkey until his trial. I followed his story for months, verifying his case and his innocence. I wrote about it for Foreign Affairs. A few weeks later, he went to sign his name like a parolee does with the authorities, and they told him he was no longer in the database. He went back to New York a week later. Wardak, who spent a year here, says it was my story that freed him, and I’m not sure of that but I’m happy an innocent man is home. The couple is divorced.

-Mujtaba Haidar, an Afghan businessman, lost his wife and two of his children in the sea while they were trying to cross to Greece. Only his older son survived and the two of them are trying to give a DNA sample to see if they can match it with those of the dead, buried with no name. But there’s no central DNA bank in Turkey and without a body, the government wouldn’t accept the samples. It would be too hard to find a match, authorities said. But that may change. After hearing about Haidar’s story from me and reading my story in PRI, a Turkish political aide in Ankara made it her mission to help Haidar. Let’s see what happens.

-I wrote a story about Syrian child brides in Turkey for the Financial Times and after its publication, another 16-year-old girl from the same Ankara neighborhood told me she had finally worked up the guts to leave her abusive marriage. When she saw her 15-year-old neighbor featured in the paper and realized she had outside support, the girl realized she had the right to a life without beatings and verbal abuse. Another story on rising divorce in Afghanistan for Rights Universal (done from Istanbul) inspired dozens of emails from girls saying they were trapped in marriages they couldn’t leave. Could I please write more about women who found a way out of the tortuous Islamic legal system that keeps them trapped in wedlock?

It’s not that I only focus on refugees, but these stories often come to me. I’ve written about the 2016 attempted coup, the purge, the referendum and women’s rights in Turkey, but I’m still learning about Turkey and the Turkish language. I have also done several talks from London to Istanbul on human rights issues.

At the moment, I’m waiting (for three months) for completed stories to be published or aired, working on a couple of multimedia projects, even dabbling in video, attempting a longform radio piece and still writing.  If I don’t write, I feel sick.

My motto: Pitch, don’t bitch. And when you need to vent, call a freelancer friend.